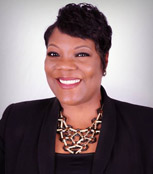 Prior to joining the Tax Commissioner’s Office, Tisa served as Communication Writer in the Office of the CEO of DeKalb County and Editor of the Rockdale News.

Tisa earned a B.A. in Communications from Georgia State University, an MBA from Troy University and an MPA from Harvard University . She and her husband David live in Conyers and they have two children.

Dedicated to serving the citizens & businesses of Rockdale County, Georgia.